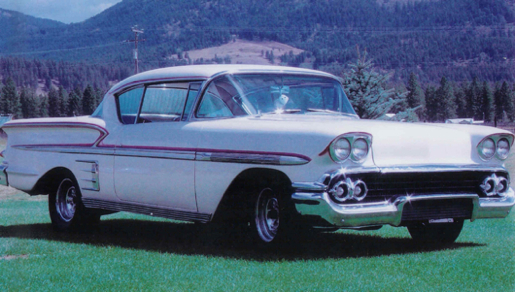 To this writer, the '58 Impala in American Graffiti is the best of the movie cars.  Not too flashy in its looks but not meek in any respect. Its simple white color gives it a somewhat stock appearance but the custom red trim and the extended taillights on the car's rocket-like tail fins highlight its unique nature.  Co- producer Gary Kurtz bought the car for the film in the Los Angeles area. 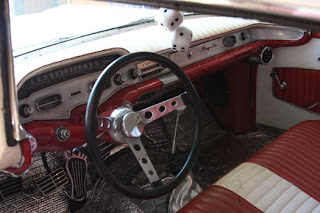 Its complete red and white tuck and roll interior was the thing that attracted Kurtz to it because the original script makes a reference to the tuck and roll upholstery in Steve's car.  Once it was purchased, the car was handed over to Transportation Manager, Henry Travers, who sent the Impala to Close and Orlandi's body shop in San Rafael, where it was covered with an appliance white paint job and some red-fogged accents around the bodylines. The car was originally metallic blue but it is not clear if it was already painted white when the car was purchased for the movie.  A set of chrome-reversed wheels was added.  Although in the film Terry brags that the car's engine is a 327 mill with 6 Strombergs, in reality, the '58 Chevy was powered by a stock Super Turbo-Thrust 348 and a 3-speed Saginaw transmission.

All the main cars were advertised for sale in Bay Area papers once filming was finished. Mike Famalette of Vallejo, CA, was looking to buy his first car and spotted a tiny ad in the San Francisco Chronicle that read, "Special Sale of Cars Used in Pictures."  The ad listed all of the main cars used in the movie, along with the Impala described as "Chevy '58 with tuck and roll."
Transportation Supervisor, Henry Travers had run the ad and was selling the cars from his home in Sonoma, CA.  After looking over the automobiles, Mike decided he wanted to buy the Impala.  He appreciated the well-proportioned Impala lacking the bizarre shapes found on many of the cars of the time.  Not only did he like the vintage rod's appearance, but also the asking price of $325.00 was within his price range. Mike offered Travers $275 but was turned down. After a little more haggling and a $10.00 loan form his dad, Mike became the happy owner of a beautiful looking white Impala with tuck and roll upholstery.  Mike's dad wasn't too happy about his son's first car having a few dents and poor brakes amongst other problems.  But, Mike paid Mr. Travers the money, borrowed a little more money from his dad to pay for gas and proceeded to drive the Chevy home.

As he was driving his prize home, Mike ran a red light because the brakes had stopped working.  Then one of the Cadillac taillights fell off.  Luckily Mike saw the plastic light cover in his rear view mirror and was able to recover it.  The Chevy was in poor shape and would require some work to make it reliable. The car's original 348 engine and 3-speed Saginaw transmission were worn-out.  With the help of his brother, the engine and transmission were replaced with a 283 small block Chevy and a 2-speed Power glide transmission. Unfortunately, Mike, still a teenager, was unfamiliar with building cars at the time and the engine and transmission replacements only lasted about six months before they had to be replaced. His second replacement engine was a 350 LT-1 along with a 2-speed Power glide transmission.  After high school Mike joined the Marines and kept his Chevy parked in his parents' garage.  Occasionally his brother would joke with him on the phone telling Mike they were turning his Impala into a low rider while he was away.

The car remained parked in his parent's garage for 28 years. During this time Mike married his girlfriend, Sandy and they raised a family in the state of Washington in a town called Colville. They had not even thought about the car until daughter, Ashley decided that for her senior project she would remove and replace the Impala's engine with a 348 Tri-Power and a 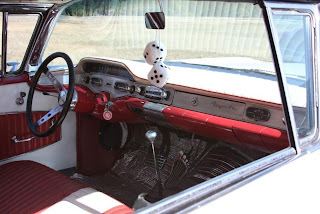 3-speed turbo-hydro automatic transmission. In addition, she wrote a paper on the importance of a positive influence a father has on his daughter, and received an "A" on her project. Aside from motor and transmission replacements, Mike has pretty much kept his Impala in the same condition as when he bought it. His reason for this, he explains, is that he makes a modest living and fixing minor blemishes just cost too much.  The front tires have been repaired several times but the back tires have never gone flat in fact the air in the rear tires is still mostly movie period air from the early 70s.

Mike took the white Chevy to car shows and events occasionally, however, in the past family and other obligations had prevented him from touring with the car the way other Graffiti star car owners do.  "I'm a little out of the loop," Mike has said.
Fortunately, for Graffiti fans Mike had been making the circuit with some replica Graffiti car owners, The Tribute Team a few times a year for events in the Northwest such as  benefits for Cancer patient care in Newport Washington.  Because the car isn’t in perfect shape Mike used to express reservations about showing the car.  "I hope people aren't disappointed when they see it," he had said.  Considering most Graffiti fans have never seen the Impala, they would be thrilled just to get a peak at this beautiful piece of movie history regardless of its minor imperfections.


After 42 year of ownership, Mike sold one of the most famous cars in American film history. On November 6, 2015 the car was sold through PROFILES IN HISTORY, which is a Hollywood memorabilia auction house. The car originally crossed the auction block at about $800, 000 but when it did not immediately sell the price was reduced. The car was eventually purchased by Ray Evernham. Rumor has it that the longtime Graffiti fan, Evernham paid somewhere in the vicinity of $300, 000 for the star car. According to a recent article on the Chevy Hardcore website, now that he has possession of the car his first order of business is to bring the classic Impala back to its original, American Graffiti condition and preserve what he says “has been on my dream list forever.” 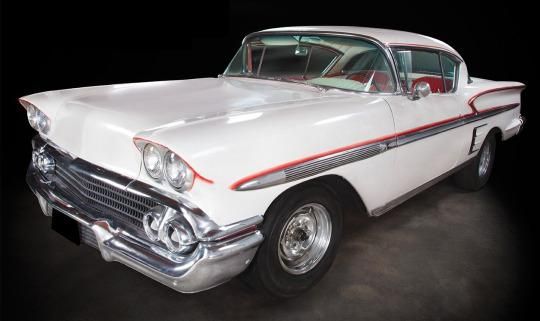 When asked why Mike finally decided to sell his star car after so many years he explained that two of his family members have on-going health issues and paying for medical costs are expensive.  So the profits made from selling the car will help go towards the medical costs. Mike believed if he waited any longer to sell his car that the rising capitol gains tax would be lost to taxes.  If you sell your diamond ring or your house the federal government wants to tax you at 20-28% depending on what your selling and it may go up to 40% next year his accountant told him.  "So, I thought I'd just go ahead and give my money to my family rather than the government while I still have control over it," he said. 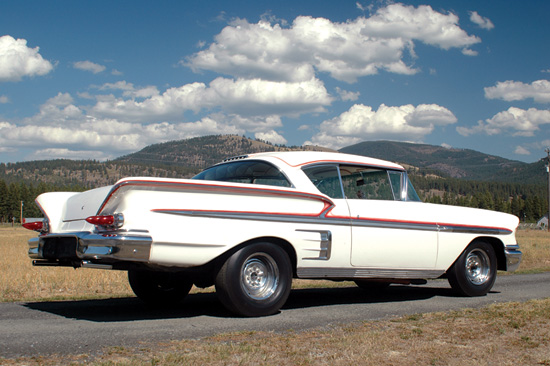 According to Mike, the original Saginaw three-speed manual transmission used in the film was sold with the car as well as a California DMV validated registration card issued to Lucas Film LTD in Mill Valley, California.  Mike said he saw Graffiti star Candy Clark’s shooting script for the movie was up for auction and a typed copy of her royalty shares. "I think her script went for $6,000" In addition, the auction also included an original poster for “American Graffiti”

Mike amusingly recounted his conversation, "I told the auctioneers, 'What ever they sell the car for-as long it's over $285 than it is pure profit to me, 'cause that's what I paid Henry Travers for the car back in 1972.' [laughs]."  Despite his seeming carefree remarks, Mike added that he is sad to have had to sell a car that he has owned since high school and will miss owning an iconic piece of movie history. 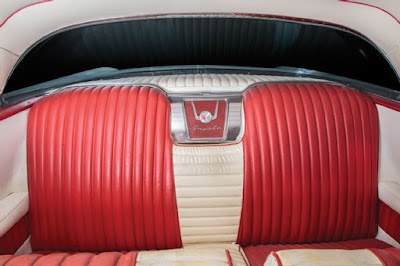 “To now own this car and lead the preservation of this incredible piece of American history is truly an honor,” said the car's new owner,  Evernham, after he first purchased the car. “To save this car for future generations, we have to go back 42 years to its original movie condition. He continued, “It really is a forensic preservation. We have to take it apart piece by piece, catalog every piece and then repair those pieces. Every piece of chrome is being straightened and re-chromed.  The emblems are being re-chromed. The nuts and bolts are being re-plated. The interior has been entirely dis-assembled and will be restored back to its movie condition.  Everything we took off is going back in it," says Evernham.

Working with Axalta Coating Systems, a manufacturer of liquid and powder coatings, Evernham displayed the finished car in all it’s American Graffiti glory at 2016 SEMA show in Las Vegas. Although this writer wasn't able to attend, the pictures below by Davey G Johnson and Ray Evernham gives you some idea of just what a magnificent restoration job was done to this classic beauty. 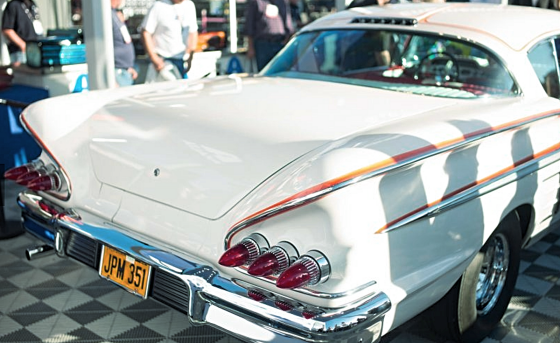 Below is a video of Mike Famalette and I discussing the car when he was still the owner.
CHECK IT OUT: