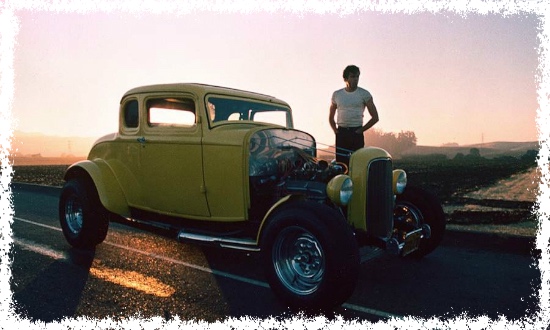 Don Orlandi is a famous name to those who are diehard fans of the 1973 nostalgic film American Graffiti. Don painted and assisted in the bodywork of the vehicles driven by the lead actors. Little did he know at the time that these vehicles for George Lucas’ low-budget car film would become some of the most popular, copied and desired cars of all automotive history, particularly, the yellow ‘32 coupe.

Orlandi grew up in Sonoma, CA and had always had a strong interest in cars. His first job was sweeping the floors for Barsotti's Body and Fender in San Rafael. He was always trying to get the employees to teach him how to paint. Pretty soon he had the shop guys teaching him how to do body work. They were always willing to help a young kid learn the business. Don picked it up very quickly, soaking up the techniques like a sponge.  While attending high school in 1970 his father and Dennis Close started Close and Orlandi Body Shop. Don immediately began working in the new shop part time.  After graduating from Mount Tamalpias High School in 1971, Don attended Marin Junior College studying Auto Shop for two years while continuing to work in his dad’s shop painting cars. During his time as a student at community college he had  aspirations of becoming a teacher and sharing his knowledge with others however, in order to get a teaching degree he would need to take several more years of school and that cost money. It was not to be. He had moved into an apartment with his fiancé and was soon working full time to support a small family,

His attitude, flexibility and willingness to attempt to do whatever it would take to complete body repairs caused the Orlandi's shop to earn a positive reputation throughout the Northern Bay Area of San Francisco. Before long Don was asked to help prepare some older cars for a low-budget movie that was being filmed locally, called American Graffiti.  Knowing nothing about the film, he agreed to the task and wound up painting a total of nine cars including a '53 Mercury, a '58 Impala and a '32 yellow deuce coupe. A few years later he painted over fourteen cars for the sequel, More American Graffiti, including an El Camino, a Dodge Wagon a moving van, cop cars, two Chevrolet trucks and several dragster bodies.

Last May, we met up at his shop, Past & Perfect where we sat in two vintage barber chairs to converse. Speaking in a friendly deep voice that is both resonant and clear, Don discussed his early years as a car painter.