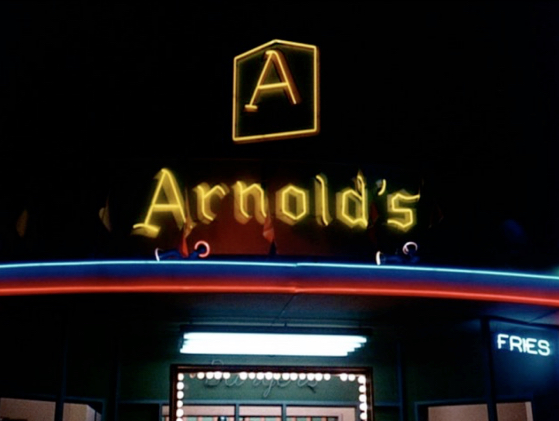 Welcome back to another installment of Kip Pullman's American Graffiti Blog.  This post pays homage to drive-in diner, Arnolds that was seen each week on TV's Happy Days.  There is a cross-pollination between the 1973 film, American Graffiti and the TV show, which first aired in January 1974. One of the similarities is  between Mels Drive-in  featured in Graffiti and and the outdoor set of Arnold's diner in Happy Days. This post is a tribute to the drive-up restaurant that looked so real on TV that we wanted to hang out there with the Happy Days gang. 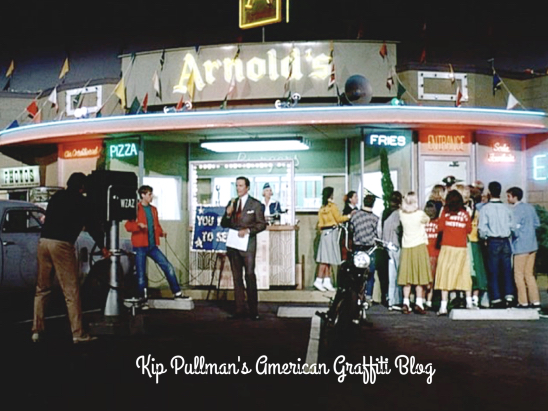 The association between American Graffiti and the TV series Happy Days is remarkable and the two are definitely linked in some way but not necessary the way most fans think they are. Even though Happy Days starred Ron Howard and premiered in early 1974, which suggests it was inspired by the success of American Graffiti, it actually pre-dates the film, and was as an unsold TV pilot in 1971. ABC aired it in February 1972 as part of the weekly anthology series Love, American Style. 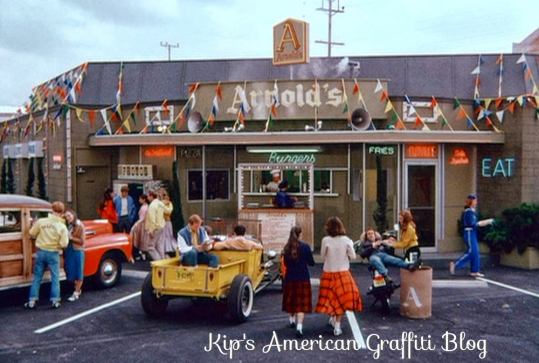 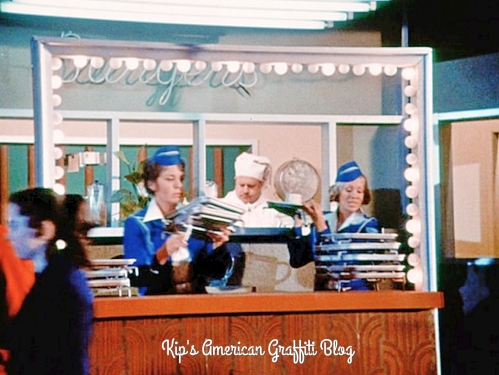 After American Graffiti‘s success, and with the popularity of the Broadway 1950’s style stage hit, Grease, ABC regained interest in the Happy Days pilot and authorized a series.  The show, created by Gary Marshall, presented a romanticized vision of life in 1950s and early 1960s America. The earlier episodes revolved around Richie (Ron Howard) and his friends, Potsie Weber (Anson Williams), Ralph Malph (Donny Most) and local dropout Arthur "The Fonz" Fonzarelli (Henry Winkler) who hung out at Arnold's. The drive-in was the favorite after-school hangout for Richie, his pals and other Jefferson High School students. 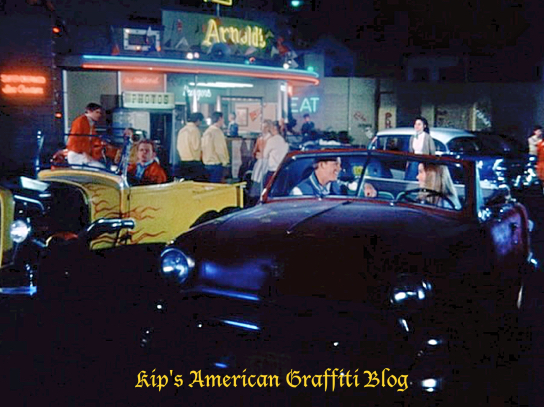 There was no direct spin-off between Happy Days and American Graffiti, but ABC clearly wanted to remind people of the movie. “Rock Around the Clock,” which opened American Graffiti, was also Happy Days‘ theme song for its first two seasons, and even used the same neon style font in its credits. In addition, Arnold's drive-in resembles Mels drive-in featured in Graffiti, as both were the hub of the gang's activities and the place where the kids in both the film and TV show converged.