MELS' DRIVE-IN: THE TRUE STORY OF THE WORLD'S MOST FAMOUS DINER - PART 2

PREFACE
I received a lot of positve feedback on my previous post, MELS DRIVE-IN PT. 1.  I even received a praiseful e-mail from Steven Weiss, the son of the co-proprietor of the first Mels franchise, Mel Weiss. Steve along with Donald Wagstaff brought back the Mels drive-in restaurants in the mid-1980s with the initial diner on Lombard Street in San Francisco.  It was very flattering to receive positive recognition from him.  He also mentioned that this fall Mels will be on the Food Network with Rachel Ray and Guy Fieri in a segment that was filmed at Mels drive-in 8585 Sunset Blvd.  W. Hollywood. So, look for it.

Before, we dig into the meat of this post I'd like to preface it with two things. First, if you haven't read Part 1 of this article, I suggest you turn your happy ass around and do that before digging into Part 2. Second, I want to present some clarification and a bit of an introduction to what is sort of a mini, San Francisco, Bay Area history lesson. When we think about and discuss America in the 1950s we tend to associate the era as a pleasant time when things were much simpler.  The era is often connected with cultural teenage icons like the greaser, hot-rod cars, and rock and roll records.  Yes, indeed they were great times.  However, when one takes off the rose colored glasses it is clear that those wonderful years were not so wonderful for everyone. If you were African American,
chances are you faced bigotry and discrimination from a society that was ruled by those who were predominantly male and pale. Your chances of finding a good job were extremely thin even though the African American freedom struggle was working hard to revolutionize American race relations long before the '50s were out.  So, as we explore this second chapter of MELS DRIVE-IN: THE TRUE STORY OF THE WORLD'S MOST FAMOUS DINER it only makes sense to discuss how the restaurant was affected by some of the historical events that took place during the civil rights movement of the early '60s. The latter part of this post looks at the restaurant's starring role in American Graffiti and the eventual demise of the original Mels. Nuff said. Start reading.

THE TIMES THEY ARE A CHANGIN'
In the early 1960s, Mels drive-in was a place of controversy as it became the location for the first mass sit-in of the San Francisco Bay Area civil rights movement. This distinction is one that Mels owners would probably rather forget. In the Fall of 1963, a group of young people calling themselves the Ad Hoc Committee to End Discrimination first picketed and then organized a sit-in at all three of the Mels-drive ins in San Francisco. Many of these people were students at Cal Berkeley or S.F. State who were protesting the fact that management did not hire Black people to work in "visible capacities" such as carhops, waiters, waitresses, bartenders, and cashiers.  The picket lines began to first appear in October as activists carried signs with slogans such as, "Where are the Negro Waitresses?" and "Don't Drive-in, Drive-out Segregation."  Other picketers made reference to Harold Dobbs' job discrimination position. By the first weekend of November the protest had evolved into the first mass sit-in of the Bay Area civil rights movement. Although new to many, it was a classic form of non-violent disruption; all the actions were legal but they significantly interfered with the drive-in's ability to conduct business. Mels was not the only Bay Area establishment to be affected by mass demonstrations. A month or so earlier demonstrations at the Sheraton-Palace Hotel in San Francisco had begun due to its discrimination against black people and after the demonstrations at Mels, Lucky's supermarkets became the target of large protests for similar reasons. 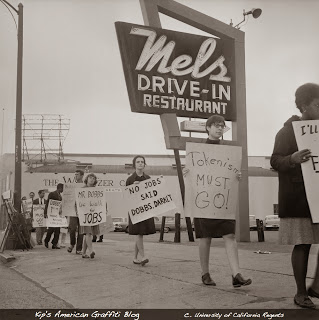 Mels co-owner, Harold Dobbs was a San Francisco Supervisor running for mayor of San Francisco at the time and some believe that the demonstrations were politically motivated because the protesters used the weekend before the mayoral election to demonstrate.   In addition, the local newspapers noted that protesters chose to picket in front of Dobb's home but not the home of co-owner, Mel Weiss. Organizers of the demonstration denied any political motivation. It is not clear as to what effect the protesters had on his campaign but, unfortunately, for Dobbs, he did not win the election; John Shelly did. One week later, management settled their dispute with the civil rights protesters by agreeing to hire and train Black employees in "up front" positions.  Some Black carhops and bartenders were hired immediately. The agreement was reached just 5 minutes before 200 protesters had planned to picket and stage a sit-in at a Mel's Drive-in located at 2300 Shattuck Ave. in Berkeley.   So, even though their discriminatory hiring practices initially echoed a negative mindset typical of the 1950s, Mels was, conversely, one of the first establishments to improve their policies by making them more fair to African Americans which reflected the awareness and open-mindedness that the civil rights movement helped to usher in.  They, in a sense, were a shiny brass hinge on the door that opened to the next generation. 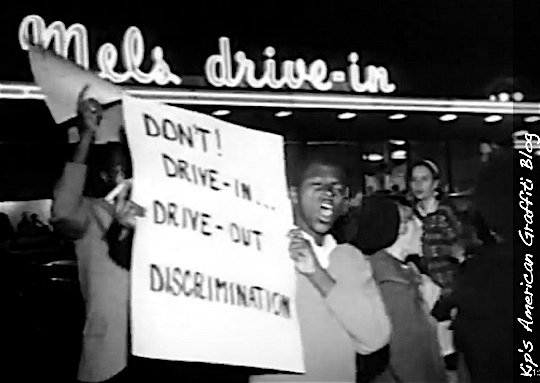 At the bottom of this page I've posted a clip from the documentary, Decision in the Streets (1965) by Harvey Richards which has some historic footage from the 1963 protest that took place in front of the Mel's Drive-in located on Geary Street.

A lthough civil rights protests at Mels had briefly threatened business, the jeopardy it had faced was miniscule compared to what the future held for the carhop restaurants. Mels continued to reign without conflicts or major competition for almost 10 years but fast-food hamburger chains eventually squeezed out their service. McDonald's was the biggest culprit.  With it's limited menu and a self-service ordering system McDonalds had established itself as the undisputed leader of the fast food industry. By 1970 The McDonalds empire consisted of 1,500 franchised outlets and was quickly growing.

By 1972 Weiss and Dobbs had sold the Mels franchise to the Foster's chain.  It was during this year that the location manager for American Graffiti, Nancy Giebink was scounting a location for a building to represent a drive-in called Burger City in the film.  The 140 S. Van Ness location came to her attention and arrangements were made through Dennis Kay, Director of Operations for Foster's West to lease the restaurant for the film. 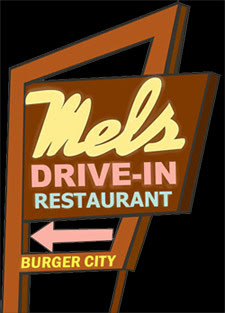 Graffiti Co-Producer, Gary Kurtz recalls the drive-in being rundown when they first leased it. "It was in terrible shape," he said. "We had to repair the neon in the signs and repair the light bulbs and paint it. When [cinematographer,] Haskell [Wexler,] saw it for the first time, he decided, since we were going to do so much shooting there, to replace the light bulbs with photofloods."  In addition, the neon letters that spelled COCKTAILS on the large street sign (under the arrow), were replaced with the words BURGER CITY to match the burger shack that was described in the American Graffiti script. Ironically, in the film, the restaurant is always referred to as "Burger City."  No one ever calls it "Mels!"  The name, "Burger City" is a twist on the popular 1950's slang term, "Fat City" meaning a great thing or place.

Filming at Mels began on Monday July 10, 1972 and continued for the following two days. During the nights of filming, the restaurant was closed for business but reopended in the morning.  The crew returned the following Monday on the 17th to film the interior scenes and exteriors such as Curt talking on the phone.  Unfortunately, in the process Lucas' expensive Eclair camera fell off the tri-pod causing damage to the camera and some of the film.  So, they had to return one more day, August 2nd to shoot some exterior shots. 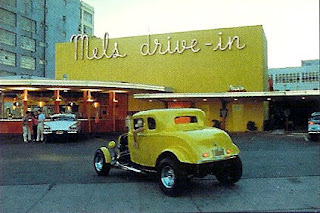 I spoke with the set decorator for the film, Douglas Freeman a few years back and he conveyed an amusing anecdote that took place when they were filming at the restaurant.  Apparently, he and “Woody” (Prop man, Dale Woodall) had gotten the "munchies," and this led to some indulgent behavior.  "We went crazy in their kitchen and started making all sorts of sandwiches, burgers, and ice cream floats for the crew and ourselves," he remembered.  "Without really thinking about the consequences, we’d eaten several hundred dollars worth of their food and when the drive-in opened up the next day they lost a lot of business because they were out of so many things," he said with a chuckle and then added,  "Needless to say the management was not too happy."


I asked Freeman about the tasks he had while working on-location at the restaurant. Since Mels did not use intercoms at their restaurants Freeman had to build about ten non-functional intercoms to be used as props for the film. "To make the base I simply used a large outdoor umbrella stand.  Those bases were extremely heavy.  I remember carrying one and dropping it on my foot and breaking a toe, [Laughs]."   Incidentally, because the intercoms did not actually work, the voices heard emanating from them in the film were added in post-production.


Sometime after filming had completed, Foster's eventually filed for bankruptcy and the restaurant was sold once more. Contrary to what's previously been written about the original drive-in, it did not close down immediately after filming.  The eatery was open several more years before it met its demise and was torn down in the Fall of 1976. 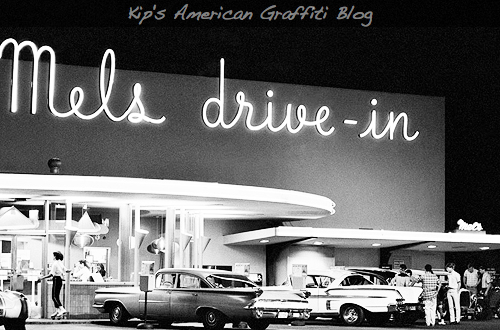 Fortunately, Mels drive-in, at 140 S. Van Ness in San Francisco, with it's dramatic structural form and dazzling neon has been preserved in George Lucas' classic film.   And, the popularity of the film, has helped to establish Mels as an icon of mid-century American popular culture.  In addition, the "Next Generation" Mels Drive-ins and Mels Diners which first opened in the mid-'80s, have assured that the name, spirit, sights, and sounds of the original eatery are alive and well for many people to enjoy.


Here's a clip from the documentary, Decision in the Streets (1965) by Harvey Richards which has some historic footage from the 1963 protest that took place in front of the Mels Drive-in at the Geary Street location.