Here we are at the end of Fall. Autumn is almost gone and the Winter solstice is coming on.  And, speaking of time passing, Its already been a little over a year since we moved Kip Pullman's American Graffiti Website into its current Blog format.  How time flies when you're having fun.  Considering this is a non-profit site with no formal promotion, but rather word-of-mouth and serendipitously discovery through Google searches, the heretofore 28,000 + page view count  over the past year is amazingly large. You might be surprised to learn that the most frequently used search term that lands people here is "Suzanne Somers American Graffiti." When I first discovered this, I was so happy to learn that middle-aged perverted fans of a fading sex symbol comprise the bulk of our readership. Thrilled. This is more than any well educated, intellectual, aspiring journalist, such as myself, could ask for.  Any whooo... I want to commend the readership of this blog for having such excellent taste in movies stars, and films, as well as impeccable taste in Internet play-safe educational entertainment such as, Kip Pullman's American Graffiti Blog. And speaking of self-promotion, this month's post features some of the promotional material used for American Graffiti.  Around the time of the film's release in 1973, many items were available for promotion of the film including a "teaser" trailer, color stills, a 24X60 day-glo title display, as well as one sheet posters.  And, they were all free of course.  Included here are just a sampling of some of these, now highly sought after, items.

When Universal Pictures first released American Graffiti, "press kits" were sent out to theaters and distributors. The press kit was essentially a set of materials designed to give movie theaters and exhibitors ideas that could be used to promote the film.  The "Graffiti" press kit, like the one pictured below, typically included a press book, press clippings, a set of 12 black & white stills, and several ad slicks.  For more on these items, keep reading... 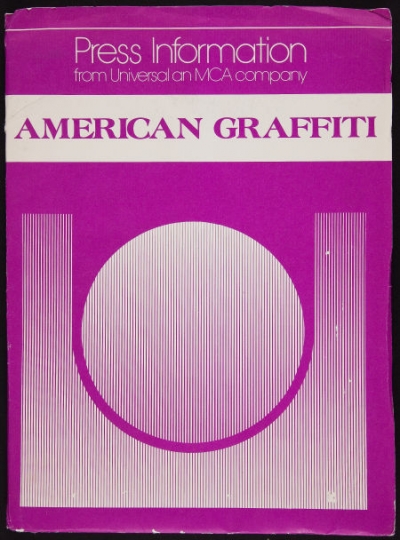 A pressbook is usually part of a press kit and consists of pages of promotional material created and distributed by the film's producers in order to advertise the film.

Pressbooks usually have information on the stars of the film, illustrations of the poster artwork, notes, and ready-made film reviews that can be planted in newspaper features and magazine articles. 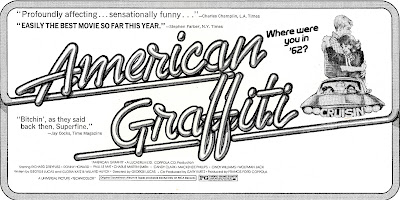 In addition to film reviews, the pressbook contains several ad sheets (also called ad slicks) with varying size camera-ready ads that can be cut out and sent in to the newspaper.  Some ads contain an area where the theater can put their name and show times. 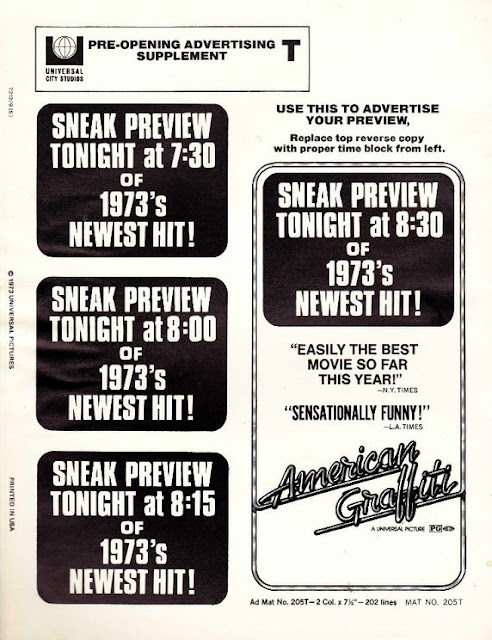 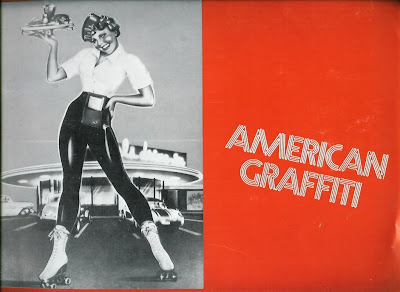 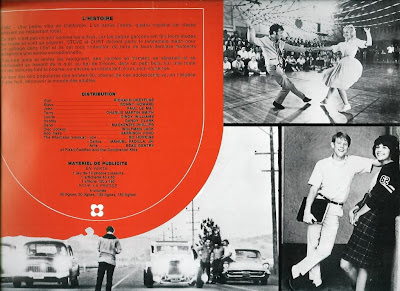 There were plenty of free promotional materials such as "Lobby Cards" made available to cooperating theaters. Lobby cards are like posters but smaller, usually 11 × 14 in (28 × 36 cm).  They were designed for display in a theater's lobby or foyer with the intention of luring patrons into the theater by showing glimpses of key scenes from the movie.  These high intensity color stills were available in complete sets of 8, (and sometimes 12), through National Screen Service.  Lobby cards are no longer used in the US, but are still sometimes produced for the overseas market.

Black and White still photos are typically included in a film's presskit.  The pictures in a presskit can include a mixture of production shots, scenes from the film, and posed shots of the actors. 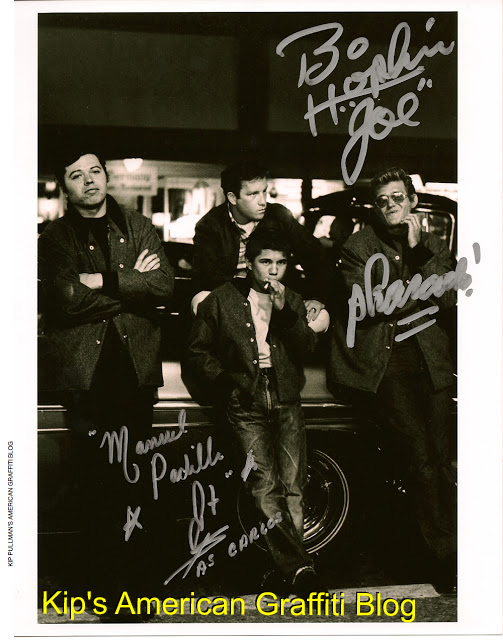 TRADE ADS FOR THE OSCARS 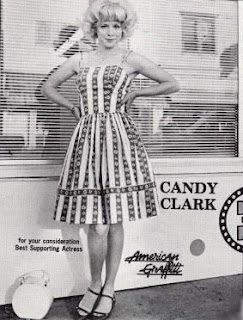 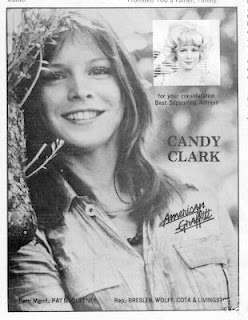 Candy Clark paid for an array of quarter page ads in show business & trade magazines, (i.e.,Variety) for her role as Debbie in Graffiti.  As the sole cast member to launch a campaign, it paid off by garnering her an Academy Award nomination for Best Supporting Actress.