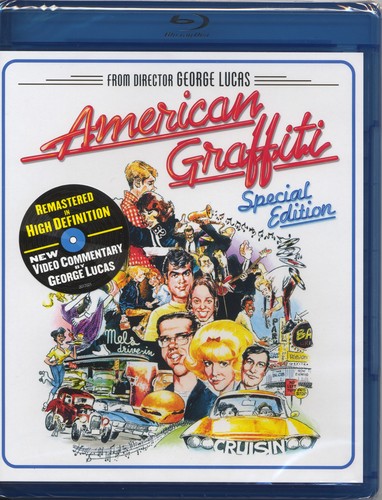 The Blu-ray Hi-Def version of American Graffiti was released last month, May 31, 2011.
Recently when I had heard through my pal, Hal Johnson that American Graffiti was being released on Blu-Ray, I was thrilled.  This was exciting news to me - not because now I could see this tremendous film at home "the way it was meant to be seen," but rather I learned for the first time on any home release there is a director commentary by George (who else) Lucas who shares anecdotes about the production of the film.  How cool is that???
I logged onto Blu-Ray.com to get more information on the new release and discovered other features including 23 minutes of original screen tests of the cast and the less riveting feature whereby one can enable pop-up windows that reveal the titles, artist names and original record information of the various songs that adorn the film.  This is less interesting to me since I've researched the tunes in the film on my own.  See our AMERICAN GRAFFITI SOUNDTRACK post for extensive info on the music used in the film.   Apparently, there are some other excellent features on the Blu-ray edition that have been previously released on DVD versions of the film including the  outstanding 78 min documentary, The Making of American Graffiti and the original 3 min. trailer.
WHY DID I WAIT TO BUY THE BLU-RAY EDITION???

As a part-time School Psychologist (emphasis on part-time), and guitar instructor I don't make enough money to always have the luxury to go out and purchase something, (in this case the new Blu-ray) as soon as I want. So I've had to curb my impulses and wait 'till I get my next pay check. Well, finally having just received said paycheck in the mail today, June 16, I quickly deposited it into the ATM machine at Wells Fargo, and immediately headed down to the local mall to purchase the Blu-ray version of Graffiti.  The Willow Shopping Center here in Clovis has both a BEST BUY and a TARGET store. It was a frustrating and disappointing experience.  After not spotting it on the store shelf I had asked the young clerk at Best Buy if they had the American Graffiti Blu-ray in stock.  He went away then came back and said "No neither this store or my Fresno store has it in stock but it can be ordered on line."   I felt like telling him, "NO SHIT I can order it online but I want the disc now, that's why I came into your freakin' store.  But, I didn't. I just smiled and thanked him and then exited the store in a polite and orderly fashion.  I had a similar experience in Target.  "Damn it, what's wrong with these freakin' chain stores??  Anyways, I went on line and ordered it through Amazon and paid the rip-off, expedient shipping fee.  Now I'm waiting.  As I wait for the delivery, I'm wondering if any of my readers out there have experienced the Blu-ray??  If so, I'd absolutely love to hear your thoughts on it.  Do tell.  It'll give me something to think about rather than spend my time wondering, "Gee,when does the mail get here?"
_______________________________________________________ 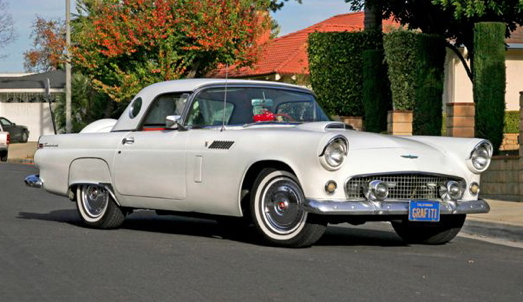 When Suzanne Somers first got the part in Graffiti, George Lucas remarked, that everyone would always remember the girl in the Thunderbird. And, he was right.  For many, almost as memorable as the girl is the car she was driving: "A white T-bird, ya understand?" 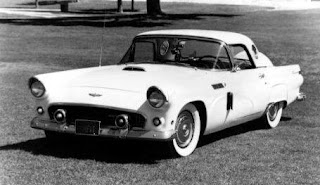 The story of the famous movie car dates back 8 years before production began. Owners Clay and May Daily originally bought the Thunderbird convertible in 1964 from a used car dealership in San Bernardino, CA.  They paid $1,000 for the used car, (A new one in '56 retailed for about $3,100). At the time of purchase the car's stock white color had been re-painted Fiesta red. When the Daily's moved north to Petaluma, CA, the car was hit from behind.  When the car was repaired the Daily's had it re-painted to its original color, white.

May would often drive the car to the Sears store in downtown Petaluma where she worked.  It was there that Graffiti Transportation Manager, Henry Travers, first spotted the car.  Clay remembers,  "When May left for home there was a piece of a brown paper bag under the wiper.  On the bag was a note asking if we would like to have the car in a movie."

She thought it was a joke and almost tossed the paper.  She decided to bring it home and when Clay read it he also thought it was a joke as it was signed and said to call Lucas Films.  "We had never heard of Lucas Films, but decided to call," he recalls.  To their surprise, it turned out to be Transportation Manager, Henry Tavers who explained they really wanted to use the car.   So, the Dalys agreed to rent out their T-bird for filming. An agreement was signed stating they would be paid a one-time price of $25.00 a night for about 6 nights of filming, and an additional $75.00 for the day shot.
Although the original shooting script for Graffiti refers to a blonde in the yellow T-bird, the Dailys were not asked to repaint their precious ride yellow to match the script.  And, good thing too, because in the film, the white color of the car serendipitously adds to the ghost-like mystery of the T-Bird and it's beautiful blonde driver.

During production of the film, when the car was needed, Transportation Manager, Henry Travers would pick up the car at the Daily's home in the early evening and take it downtown for filming.  Because the owners used the car as transportation to work, Travers made sure the car was returned promptly each morning by 6:00 AM.

At the time Mr. Daily was working in San Francisco as a manager in the New Technologies Dept. for Pacific Bell. Because of his early morning commute, he and his wife rarely stayed up late enough to witness the filming downtown. He does remember witnessing the filming of the scene where Richard jumps out of the VW when he sees the T-Bird and he runs up the street. On that night May briefly spoke to Ms. Somers to ask her how the car was handling.  Clay never did speak with the actress.  During interviews in the past, Ms. Somers has mistakenly claimed that during filming the car owner made her nervous because he was always close by, polishing the car, and telling her to be careful.  However the "nervous car owner" was not Clay Daily but in fact Henry Travers who was making sure the car was being handled properly and taken care of.  Clay recalls that he was never overly concerned about the welfare of his car and that Mr. Travers took very good care of it.  In fact, a couple of times he had to jump start it before he brought it back to Daily's because the actress would leave the lights on and the radio playing between shots and run the battery down. 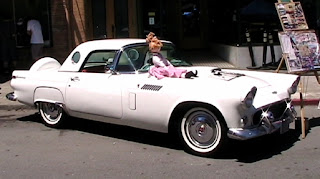 This eye-pleasing classic has remained relatively golden since it was first built however there have been several repairs and modifications made by the owners.  The original Long Block 312 was replaced around 85,000 miles. The stock Holley "teapot" 4-barrel carb. has been
replaced with the more modern 650 Holley carb.  The original "Ford-O-Matic" automatic 3-speed transmission has been rebuilt.  Other upkeep and modifications include a 4-row radiator, a 7-blade flex fan, air shocks and an alternator, as well as an AM-FM radio and a CB radio.

For every famous movie car there are many impostors.  Mr. Daily states that the most outlandish claim came to his attention in 2006 when he was e-mailed by another T-Bird owner. "He sent me a picture of a White 1955 Bird at a car show in NJ that had a very official document in a frame that said it was the one used in the movie and driven by Susanne.  The document was even signed and verified by someone who said he was a manager working for Universal Studios," said Daily. 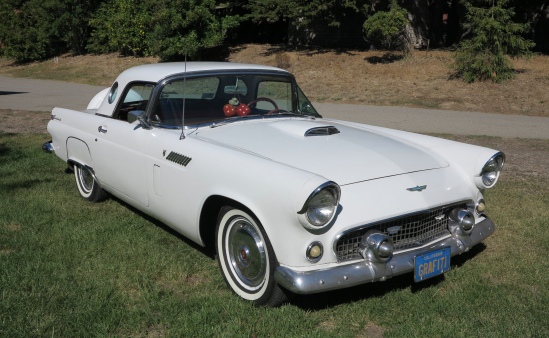 After owning and taking care of the white beauty for 50yrs the Dailys finally decided it was time to sell the car. Its proud new owner became Petaluma resident, Jerry Causbrook who bid against a museum and a major restaurant chain. Causbrook is also the owner of a 1967 Citroen 2CV supposedly driven by Richard Drefuss' character in the movie. It was rumored that for a brief time he was the only person in the world to own two original American Graffiti vehicles.  This did not last for long. In Aug 2019 the car was put up for auction and sold. 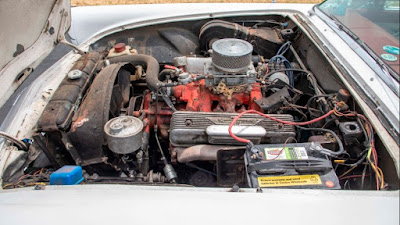 The Untouchables is an outstanding 1987 gangster film directed by Brian De Palma and has the distinction of featuring several American Graffiti alumni.  The film stars Robert De Niro, Kevin Conner, Sean Connery and the actor who played "Terry the Toad" in Graffiti, Charles Martin Smith.  He plays the accountant Oscar Wallace who is assigned to the crime fighting team whose sole purpose is to take down gangster, Al Capone and bring him to justice during the Prohibition era.  John Bracci who played the gas station attendant in Graffiti  is credited as Fat Man in this fine film.  Another alumni, Del Close was the man at the bar in Graffiti who utters "He must not have been used to drinking," when Toad was on all fours puking and sick as a dog named "Ginger."  Here he plays the creepy, Alderman. 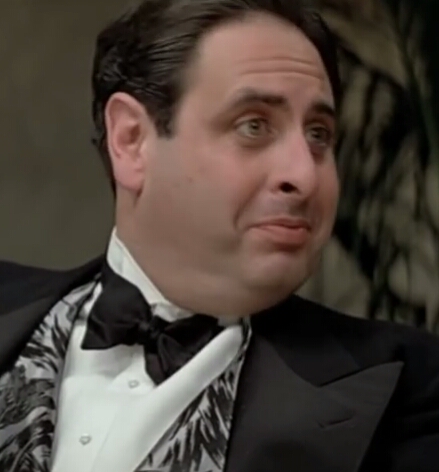 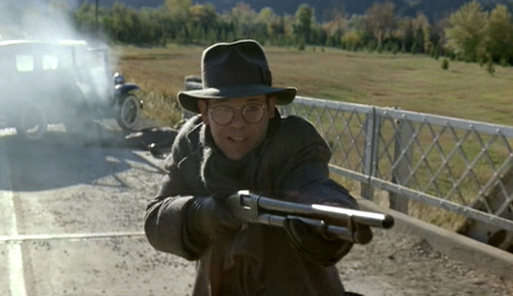 By the third act, Wallace grows a pair, picks up a gun and puts an end to Capone's Bull shit !

This autobiographical account of defeating gangster Al Capone is fun to watch.  The fact that it is based on actual events (although embellished) makes this 2-hour epic real and exciting.  There are some violent scenes, such as Al Capone unexpectedly taking a baseball bat to a dinner guest and beating his brains out. Violence such as this helps convey how horrible a gangster Al Capone really was. The film was a success when it was first released and it was nominated for 4 Academy Awards. Sean Connery won Best Actor in a Supporting Role.  If you like action crime dramas you'll love The Untouchables. 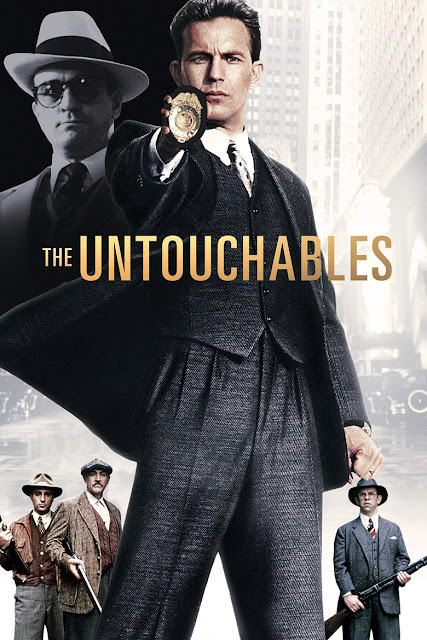