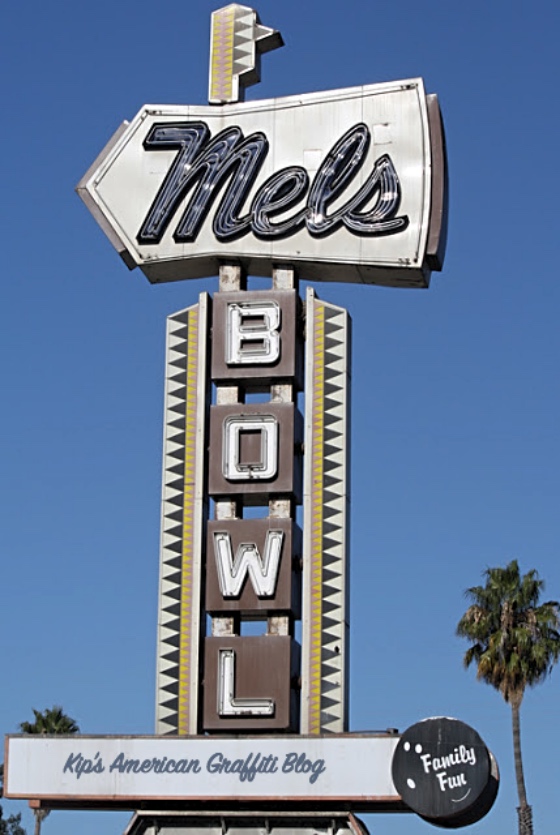 I grew up in Redwood City, CA for the first 12yrs of my life.  I recall celebrating my friends' birthday parties at Mels Bowl. I also recall being a horrible bowler.  Like most sports I participated in, I wasn't very good. I sucked, to put it bluntly.  Being left-handed made it more difficult to learn from others. At least that's my excuse and I'm sticking to it. Regardless, of my lack of ability, I somehow always managed to have fun when I played.  It must be some sort of masochistic tendency I have. So, it was much to my dismay when I read a while back that the bowling alley where I first learned to bowl-badly was no longer standing. Without further adieu, and any more gutter talk lets segue into today's topic:  The demise of Mels Bowling and the struggle to preserve a nostalgic piece of history. 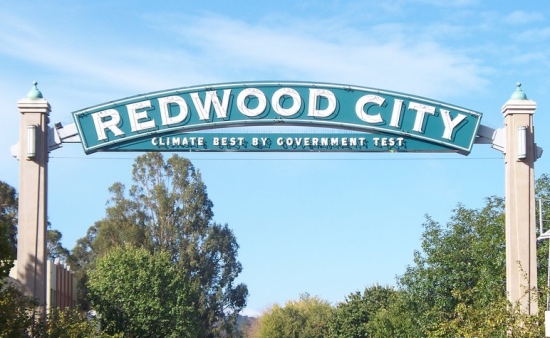 Mels bowling, formally located at 2580 El Camino Real in Redwood City had been a landmark since 1960.  In 1969 Mel Weiss sold the 40-lane bowling alley business and it was renamed "AMF Redwood Lanes" but the Mels sign was never changed and it remained an iconic marker for Redwood City before it finally closed down May 8, 2011. Despite the name change, up until its closing the bowling alley continued to be referred to as "Mels Bowl." The building was demolished in 2012 to make room for a 4-story apartment complex. 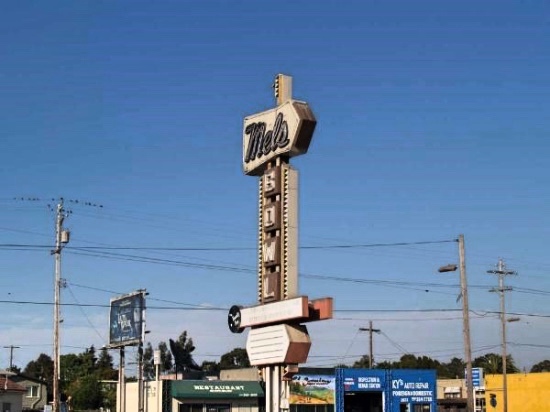 Goodwin Steinberg (1920-2010) was a master architect who designed the bowling alley which was constructed between 1959 and 1960.  The Boicelli family had owned the property for over 100 years before it was leased to Mel Weiss who established and operated the bowling alley for about 10 years. 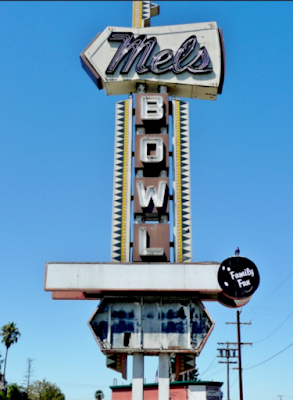 There were many who wanted to preserve the bowling alley.  As a result, the city council studied a submitted environmental impact report and considered Redwood City's Historic Resource Advisory Committee's recommendations to keep the bowling alley.   When it was all over and the dust had cleared the building was considered to typify post-war bowling alley architecture but it did not stand out as significant in terms of architectural style.  The Mel's bowling sign, however did appear to be significant locally and at the state level as a good example of mid-century Googie sign. The tall freestanding mid-century Googie sign was considered to have integrity in Redwood City.  The sign made the listing on the California Register of Historical Resources (CRHR). Good news!  The beautiful sign would not be destroyed.  The challenge became finding a more appropriate location for the sign... 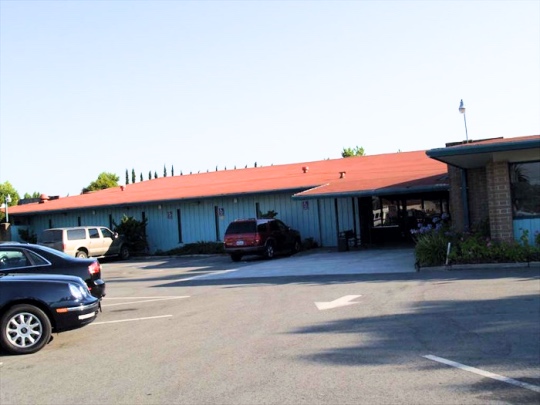 Stretched out over a two and half acre lot, the rectangular building looked fairly ordinary and did not stand out in architectural style. 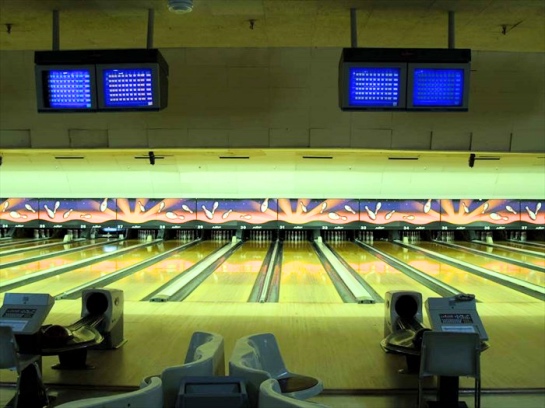 Because the inside had been updated, the lanes themselves did not conjure up nostalgia by any means. 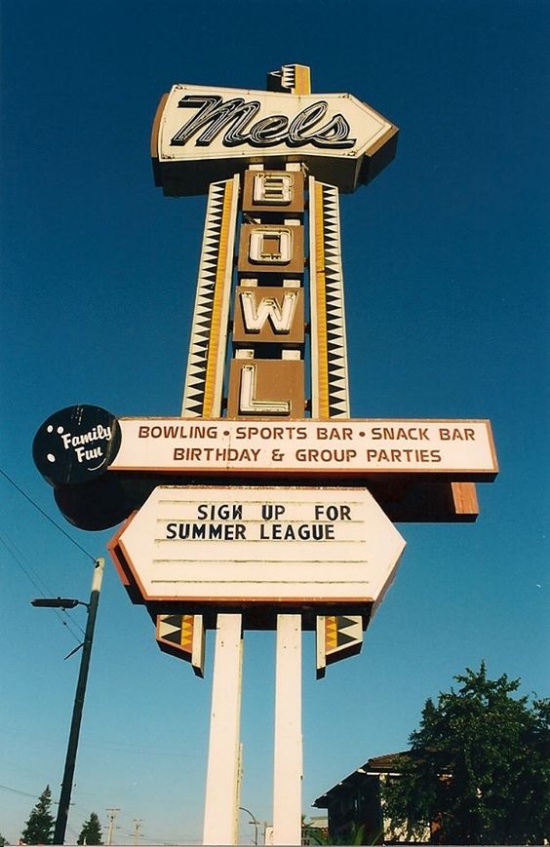 The free-standing, vertically oriented neon sign was located at the front of the lot at 2580 El Camino Real, Redwood City, CA in a typical mid-century appealing decorative style.  Opened: 1960 Closed: 2011.

The sign found a new home at the Redwood City Car Wash, 215 El Camino about 2 miles down the road from it's original location.  Photo:  http://www.roadarch.com/signs/ca15.html 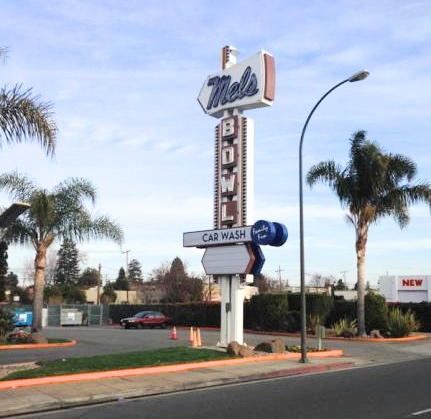 Although a bowling alley and a car wash couldn't be more different types of businesses, the wording on the sign has slowly evolved as the towering structure was refurbished.   Photo:  Bonnie Eslinger/Daily News


So who is this Mel guy? You may ask.  He is Mel Weiss who owned three other bowling alleys designed by Goodwin Steinberg: Mels Palm Bowl in San Jose (built in 1957), Mels Southshore in Alameda (1960) and Saratoga Lanes in San Jose (1959). 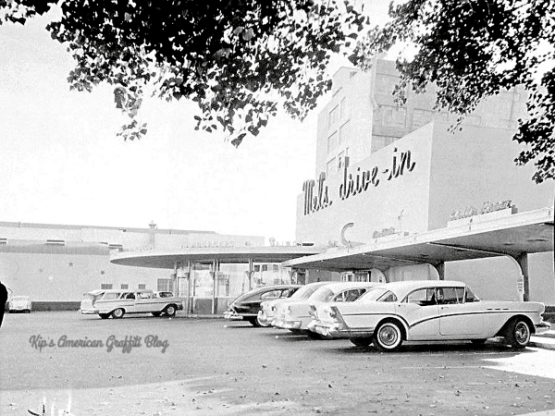 The drive-in chain's popularity held sway for a little over 20 years before it started to lose its appeal due to the competition of quickly emerging fast food restaurants such as McDonalds, Jack in the Box, Burger King and others.  Ironically, by 1976, the first Mels built was the last to be demolished. 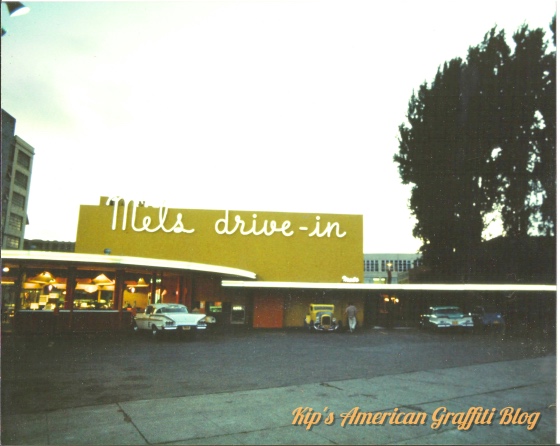 The 140 S. Van Ness Ave. location had a huge parking lot in front for drive-in service and another parking lot in the back for Mels Grille Room which provided a little fancier experience with valet parking, candlelight dinners and a cocktail bar.  This drive-in is probably the most famous Mels location as it was featured in the nostalgic George Lucas classic, American Graffiti (1973).

Mel Weiss' son, Steven Weiss grew up parking cars at Mels and later managing one of the chain's locations.  With the business still in his blood, Steven Weiss and partner Donald Wagstaff opened a popular reproduction of Mels in 1985. There are now four in San Francisco and three in the Los Angles area with another location to open soon in Santa Monica. 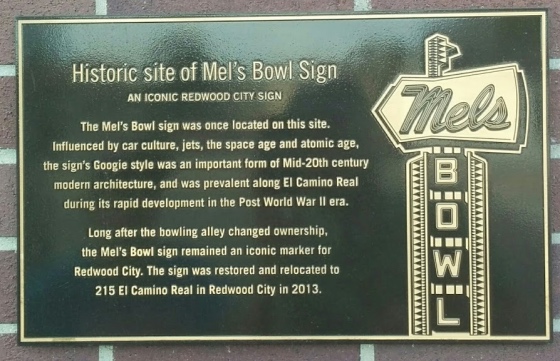 A plaque has been set up to honor the nostalgic sign.