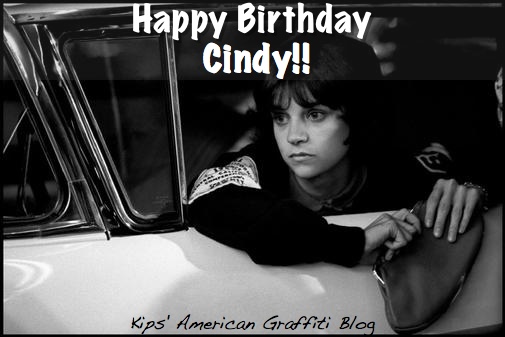 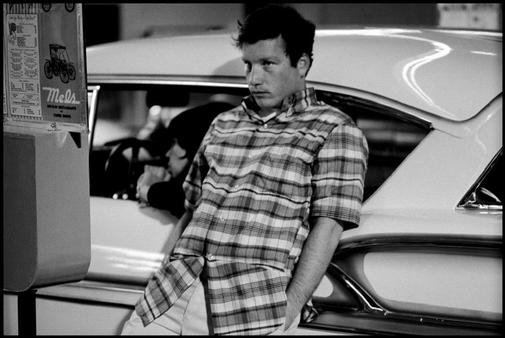 Even though actor, Richard Dreyfuss had already been working for years on stage, on TV, and in movies, his first widespread movie recognition came in 1973, with American Graffiti. The endearing & nostalgic film, directed by George Lucas, was an enormous hit. It grossed $115 million which, according to Box Office Mojo, is the monetary equivalent of more than $500 million when adjusted today for inflation.  Yet, despite being praised by others and giving an excellent performance in the film, Dreyfuss did not like his contribution when he first saw it. He once told George Lipton of The Actors Studio, “I watched the movie the first time in a work print. During one of the work sessions I wasn’t expected that night I just showed up. I was seeing myself on a large [screen] for more than a minute and a half.  And, when the film was over George said, “What’d you think?” Looking at the floor and in a low voice Dreyfuss replied, “Well, I think, it’s a very good movie and I think you should cut me out of the film, and I know how to do it.” [laughing] I was totally crazed!

Soon after the film first opened, Cindy Williams, who played Laurie, and Charles Martin Smith, who portrayed Terry “The Toad,” went to Westwood, CA to see the low-budget (aprox $750,000) comedy. "There were lines around the block," Williams remembered. "I called Richard Dreyfuss, who was doing 'The Apprenticeship of Duddy Kravitz' in Canada, and I told him. He didn't believe me. He thought I was making it up. They let Charlie and me in, and we had to sit on the floor in the back. It played a year in Westwood!"


In a recent interview with movie critic, Peter Howell, the legendary actor said he was  initially attracted to his role because of the character’s self-awareness. “When George Lucas was casting for that film, he told me I could play either Curt or the little guy (Ron Howard’s role). I said, “I want to play Curt, because he’s reflective, Dreyfuss recalled. He knows that 20 years from now, he will remember that night. He knows it. So I want to play that.” The actor’s love of portraying a character with personal insight is conveyed in his amazing ability to portray such a person - one who possesses a clear perception of himself and life around him. 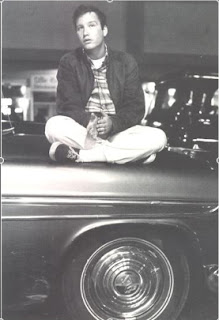 Dreyfuss’ performance in Graffiti brilliantly conveys the personality of a kid who is hyper-aware of the fact that he is experiencing the last night of his carefree teenage life and is cherishing the moment in time as it is happening. An example of this is the scene in the film where he’s walking down the hall of his former high school and he tries to open up his locker but the number combination has already been changed. “You could see him doing it smiling and remembering it, filing it away,” Dreyfuss recalled.  I think of all the characteristics that I like to play as an actor, self-awareness is the top. There are characters I’ve played that don’t have it but that’s what I enjoy playing the most.

Candy Clark who portrayed Debbie in American Graffiti read the above post and sent me a comment stating that Dreyfuss was having difficulties in his personal life at the time of making the film.  "Richard was very depressed on the movie," Candy recalled.  "His girlfriend had broken up with him and he spent a lot of time in his hotel room crying. This is probably what tainted his perception of his performance. Actually he is super in the movie. He just couldn't see it at the time." 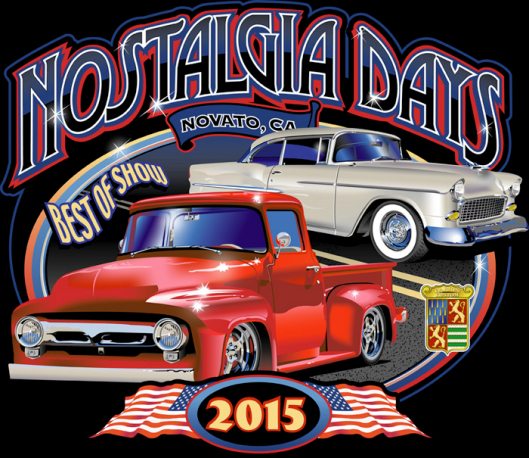 What r u doin' August 14th & 15th, 2015??  We know, you're goin' to our pal, Marv Giambastiani's, NOSTALGIA DAYS.   The  incredible, 19th annual Cruise and ROD & KUSTOM CAR SHOW takes place in Novato, CA. The cruise is on Friday the 14th and the show is on Saturday the 15th.  It is the social event of the Summer.  Remember, Anybody who's anybody will be there - so be there! Even a possible nobody can develop into a somebody just by attending.  It's that incredible. 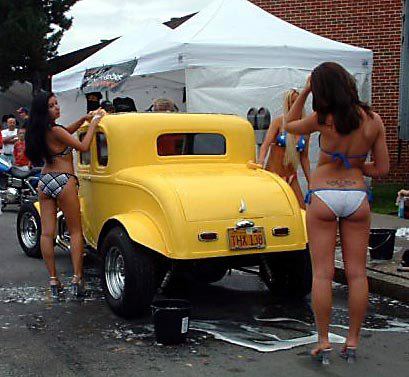 ABOUT THE TOWN OF NOVATO...

Dissimilar to other Graffiti-town wannabes, the city of Novato has some real American Graffiti credibility because portions of the George Lucas classic were filmed there.  Which parts, you ask? Okay, smarty pants, I'll tell you-the rural parts.  More specifically, the canal scenes.  Remember? This was where Terry "The Toad" Fields (Charles Martin Smith) got drunk, made out with Debbie (Candy Clark) and lost a beautiful white '58 Impala that belonged to his friend, Steve (Ron Howard). 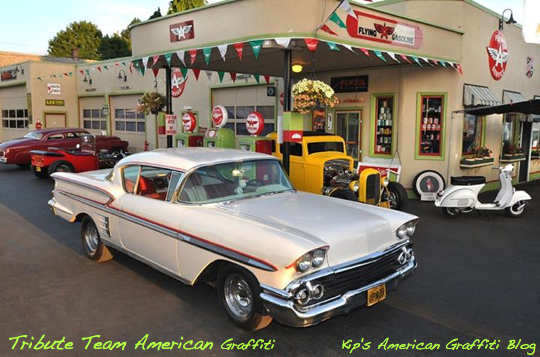 Rural Novato is also the same "Lover's Lane" location where Steve (Ron Howard) and girlfriend, Laurie (Cindy Williams) attempt to "watch the submarine races" but get into an arguement that ulitmately leaves Steve walking home "empty handed," so to speak.  In addition, the town is directly South of Petaluma, where most of Graffiti was filmed.  In fact, the only thing that stands between Petaluma and Novato is a gas station. No ordinary station mind you, but the actual location where John Milner (Paul LeMat) removes the header plugs on his yellow coupe and briefly chats with the gas station attendant before heading off to Paradise Road. 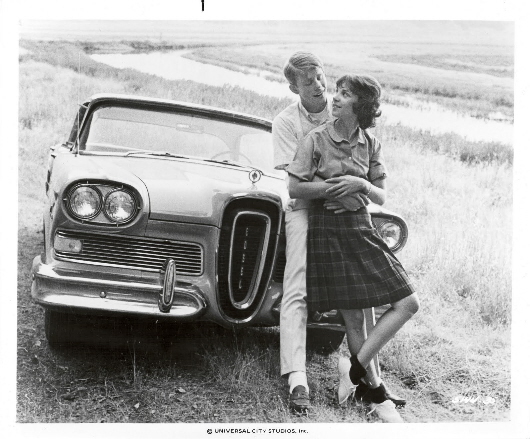 NOSTALGIA DAYS in Novato, CA is gonna be a freakin' blast!  The event has a lot o' cool cars & real cool rock & roll played by real musicians. But, wait- there's more! American Graffiti star, Candy Clark will be there in person to meet, greet and sign autographs. What more could you want?  So whatta you waitin' for? Enough of this chit chat. To learn more about Nostalgia Days Rod & Kustom Car Show click on the pic of Toad & Debbie below.  Later, Alligator! 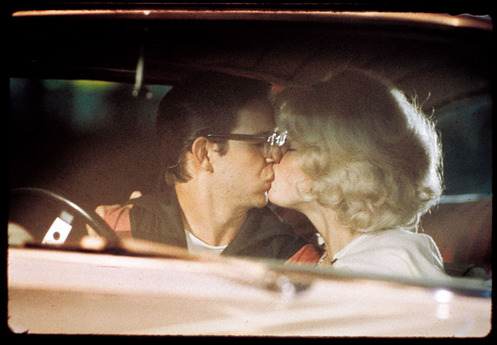 Posted by Mark aka Kip Pullman at Friday, August 16, 2013 No comments: 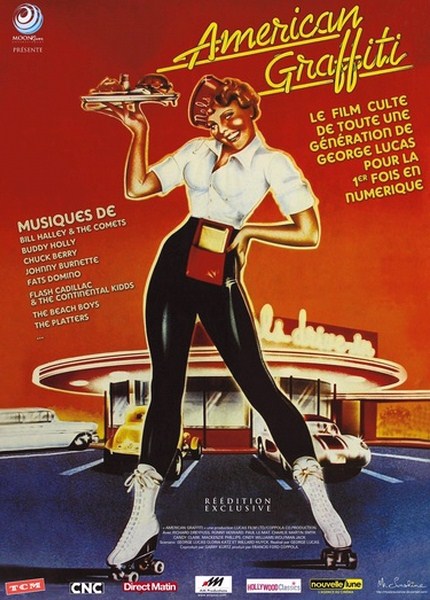 Hey folks our pal, James M. Tate over at Cult Freak Film has recently seen American Graffiti on the big screen for the first time. Up until recently, he'd only seen the George Lucas masterpiece on a regular TV screen.  Much to his surprise, he feels what he experienced was a whole new film. He wrote about this and shared his insight.  Be sure to check it out by clicking on the photo below, that is unless of course, you want a knuckle sandwich!