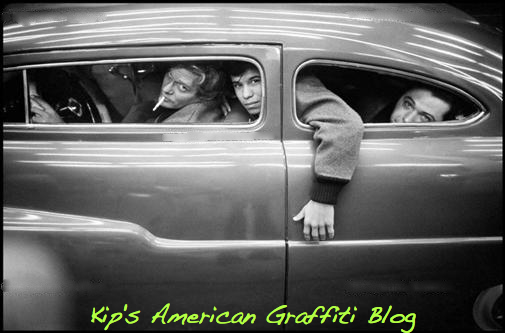 American Graffiti’s Transportation Supervisor, Henry Travers first saw the ‘51 Mercury coupe; in its original form, in the spectator's lot at a stock car track near the Northern-California town of Sonoma. It had the same wheel-covers and tires that appeared in the film.  However, after it was purchased it was taken to Close and Orlandi's body shop where it was prepared for the movie in a slap-dash manner.

﻿
The car was made to look good on film only with no regard for practicality or function. For example, rather than cut the rear window to fit the new 4" chop job, the stock piece of glass was just slid down into the body panel and covered up with Bondo body filler and paint. The side-rear quarter glass and wing windows were simply removed and the door windows were left rolled down during filming. The headlights were Frenched by simply Bondoing the headlight trim rings to the fenders.


﻿The original grill opening was rounded and a spare bumper lying around the shop provided a makeshift grill bar. Many of the weld seams from the chop job were left exposed in the interior and can be spotted in the film.

Finally, after the hood, trunk and doors were shaved, the car was painted Cimarron red. All the modifications were done within the span of about 2 weeks. The stock 255.5, V-8 flathead engine topped with a Ford-Holley two barrel carburetor was left untouched.

After the filming of Graffiti, Director, George Lucas put Travers in charge of selling the ‘51 Mercury as he had with several of the other movie cars. When nobody purchased the car it was transported down to Universal Studios along with the yellow coupe.


The Pharaoh's car remained on display at Universal Studios Tours for several years after the film’s release before it was parked and stored in a shed on the lot.

At some point, custom car designer/builder & artist, Ed "Big Daddy" Roth acquired the car, and spruced up it's appearance and then it wound up in the hands of the amazing Rockabilly singer & guitarist, Brian Setzer of The Stray Cats & Brian Setzer Orchestra fame. Apparently, Setzer bought it sight unseen, without knowing it was the Graffiti car. Unfortunately, the car didn't run when he bought it.


In a 2001 interview Setzer said, "Graffiti or no Graffiti! [laughing] I had to get rid of it at a really embarrassing price, it was just a big pile of junk." Although the Merc was a "pile of junk," its appearance has spawned a lot of copycats that look and run much better than the submarine-like original ever has.

So where is this classic Merc today? Rumors, stories, and hints exist as to its exact whereabouts but, I'll share with you 2 pieces of information that I have: First, a guy who lives near Portland, OR. claims he has restored and modified the car and currently displays it at car shows and other events. Along with this car, a poster board is usually displayed with photos of some of the Graffiti cast posing with it as if to document its authenticity as the American Graffiti Merc. So, is it the real thing? The answer is an emphatic, NO!

There are important details, such as forged documents which we won't go into here, that prove that the owner has been touring with a fake. Questions of ethics, morality and legalities are raised whenever anyone makes false claims and purposely gives inaccurate information about a car in order to gain fame and profit, as is the case in this situation. This pseudo American Graffiti Merc has been seen listed for sale on the internet with the asking price of $95,000, BUYER BEWARE!

The second piece of information I have as to the whereabouts of the REAL car is much more plausible. Several years ago a Graffiti enthusiast spotted the car on the East Coast. He found the Merc rusting in the back lot of a repair shop on the New York, New Jersey border. Since then others have reportedly confirmed this finding and several pictures of the car have been taken, (like the one above). Most recently, (April 2013), I was contacted by the said car owner, Steve via e-mail and since then we've spoken over the phone a couple of times. According to the New York car owner, his brother bought the Merc from Brian Setzer sometime in the 1980s and he has the license plates and pink-slip/paperwork to prove it. Steve inherited the classic car from his brother after he passed away.  When asked why it's just been sitting in his yard for so long he claims that time and money have prevented him from fixing it up.

As a mechanic, Steve has bought many cars, fixed them up, and resold them in a relatively quick manner, however, he's always been aware that repairing The Pharaohs' car was going to be a major commitment. The good news is he is now committed to working on restoring it back to it's Graffiti condition. He says it is now parked inside his shop and he has recently got the engine working. Next he will concentrate on doing some body work to the Merc as time and money permits. Currently, his major priority, he said, is fixing the leaky roof on his home and the damage it caused as well as remodeling the kitchen with new butcher block counters for his wife. Ahhh, priorities. I am in continual contact with Steve and will keep you updated as I learn more.  Oh, and in case you were wondering; Steve is not selling the car.

There are some personal wild rumors circulating as to why the car had remained outdoors in a state of disrepair for so long. Far be it from yours truly to continue the story if there's a chance it may not be true. One thing’s for sure, all the false claims, uncertainty and lack of knowledge add to the mystery and legend of the original '51 Mercury that was featured in American Graffiti.

The late-great, Glen Shimmin, from Washington state, built a '51 Merc replica that duplicates every detail of the original movie car including all of its flaws. In order to get the details exact Glen consulted with Don Orlandi who customized the cars for the 1973 film. Only a true fan of American Graffiti would go to such lengths. A coupla’ years back I used my camcorder to video tape Glen as he explained how he constructed the car. It was (and still is) a fascinating story. Check it out:

Hey Folks,  I flew back home from Petaluma's Celebration of American Graffiti last Sunday, and boy, my arms are still tired!  But, all seriousness aside...  I had an incredible time and I'll be happy to share with you photos from the event as well as some other cool stuff.  However, for now, I have to return to a different world and concentrate on my occupation as a School Psychologist which provides monetary compensation that goes to paying rent, food, and my student loans.  I think you know what I'm talkin' about.  But, stay tuned for some great articles, posts, & pix.  In the meantime, here's a video about the Petaluma event from the local Bay-Area news.  See ya soon!

THE UNIVERSAL YEARS: FOLLOWING THE PROGRESSION OF A MOTOR


Hey, how’s it hangin'? If you're like me than the answer is, "A little to the left." Any whooo, before I head off up to Petaluma, CA this Thursday, to celebrate the 40th anniversary of the release of American Graffiti, I thought I'd post a special article featuring cool pictures of the yellow coupe (now known as Milner's Coupe). In a previous post sub-titled "The Fastest Thing in the Valley" I described the controversy over the size of the '32 Ford Coupe's engine and the rumors that exist as to the motor being swapped sometime after it was first featured in the film. Is it true? Is it not? Do we care? Is the new Pope Catholic? So, in an attempt to clear up the confusion (or add to it) the coupes’ current and longtime owner, Rick Figari sent me some scraps from his scrap book to share with my readers. That would be you. It’s the least we could do for those of you who aren’t able to attend the celebration. The pics featured here are from a short period in the car’s history and are exclusively of the coupe’s engine as it appeared directly after it was featured in the 1973 film up until it was restored in 1982 by the individual who purchased it from Universal Studios after the sequel, More American Graffiti, Steve Fitch.   After looking closely at these pics of the motor over the years, and some logical deduction, I'm pretty convinced that since it was first featured in the 1973 film, the coupe has had the same engine - just worse for wear each year.  Enjoy, and I'll see ya at the finish line.