MELS DRIVE-IN: A MODEL OF THE PAST 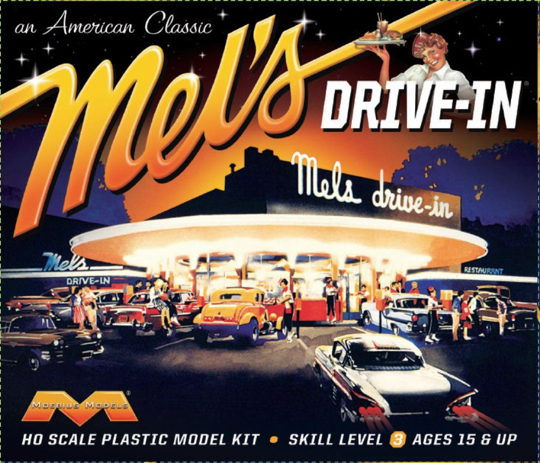 There are many famous landmarks all over the world such as the Eiffel Tower and the Egyptian Pyramids. Some of these landmarks even exist right here in the United States of America including the Statue of Liberty, the Golden Gate Bridge and of course, the original structure of the very first Mels Drive-in in San Francisco made famous in George Lucas' 2nd feature film, American Graffiti.

Although demolished years ago, the first Mels drive-in, formerly at 140 South Van Ness, with its classic circular structure and glowing neon has remained a shining icon in the hearts and minds of American Graffiti fans long after the final music-filled scenes first ended. Collecting models of many of the popular cars featured in the film has been a popular hobby of many Graffiti fans so it seems it was only a matter of time (say, forty years), before someone produced a model kit of the drive-in eatery so that the hobbyist had a place to park their Graffiti model cars.  That job went to Moebius Models.

The folks at Moebius have developed a highly detailed plastic molded, HO scale model, of the original restaurant in light grey.  The features include signs, booth, diner counter and rooftop signs along with plastic for the windows.  The model drive-in consists of 64 plastic parts and numerous 4-color plastic pieces.  Color printed paper is used for all of the interior. It is scaled in 1/87 so it will also fit into any HO scale railroad setting and retails for about $44.95 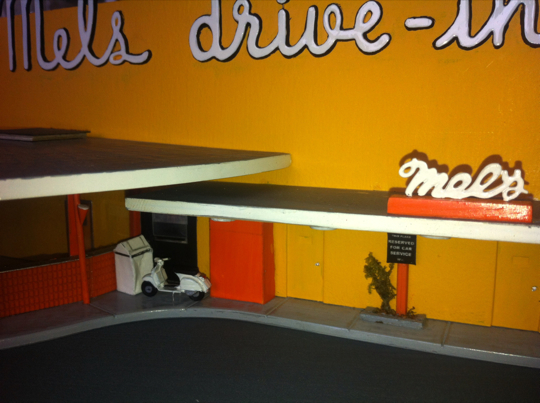 Graffiti fan, and guest contributor, Charlie Lecach has already purchased two models and has almost completed painting and detailing one of them, which he calls his "test model." He was nice enough to honor us with a couple pix of his handiwork and give us an idea of just how amazing one can make this model appear.