I was surfing the Internet, specifically the incredible, Goleta Air and Space Museum a while ago and I came across some pix of a familiar looking plane.  It was a white DC-7C prop plane with orange and white stripes.  As it turns out the said plane was the same one that was used for the final scenes in the 1973 classic, American Graffiti.   How did I know it was the same one seen in the film even though it didn't have Magic Carpet Airlines painted on the side?  Well, as I learned, apparently planes are assigned a license or registration number that is displayed prominently on the side of the aircraft and remains with it for its entire life regardless of how it is used or how many times it changes hands. The number makes it easier to track its history compared to automobiles.  Movie car fans know what I’m talking about. The serial number of the DC-7C featured in Graffiti was N5903.  Because this particular aircraft, built in 1956, was somewhat rare, aircraft enthusiasts and aficionados would occasionally snap a pic of the airplane when it was spotted in a particular airport.  Thus, we are blessed with some really cool photos of the 4-engine plane. And, so, your buddy, Kip is here to provide you with an incredible pictorial history of this beautiful aircraft. Dig it baby!  Please note all of the pix on this particular post are published with the permission of the photo owners.  So don’t be a "Dick" and steal these. If you want to borrow or use a particular photo, please write and ask for permission. Thank you for not smoking and have a nice day.
________________________________________________________________________

NOT JUST ANY PLANE WILL DO 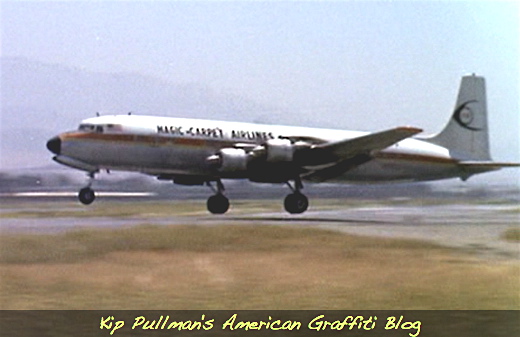 Although there were hundreds of classic cars featured in George Lucas’ masterpiece, American Graffiti, there was only one plane in the film. It is featured at the end of the story and it is the transportation that lifts Curt, (Richard Dreyfuss) out of the restricting and limiting confines of his small hometown and into the great wide-open future. The company which loaned the prop plane was named, Magic Carpet Air Travel Club.  Lucas once told writer, Larry Sturhahn that for the filming of this pivotal closing scene, they had specifically sought out a prop plane but they weren't easy to find.  Eventually the crew found a few airlines who would lease the plane if their name was prominently displayed on the side of the aircraft in the film. The choices included Air West, Air California, and Magic Carpet.

"I decided to use Magic Carpet, but it wasn't written in the script," Lucas recalled.  He kept to the agreement but couldn’t pass up the opportunity to slightly alter the name to make it more fitting to the story and so the Magic Carpet Air Travel Club became Magic Carpet Airlines for the movie. "I thought it was appropriate, and that's one of those things that when fate gives it to you, you make the decision," said Lucas. The amended name was painted on the left side of the DC-7C. The aircraft was parked at Buchanan Field Airport in Concord California (Contra Costa County) where the final scenes of the movie were first filmed on August 3, 1972. Legend has it that on the first attempt to film the prop plane taking off, it got a flat tire on the runway and filming had to stop and a second-unit returned the following day to film the take-off, once the tire had been repaired.

THE LIFE & DEATH OF A PROP PLANE

The aircraft was sold to T & G Aviation, Inc in 1976 and by 1980, when this picture was taken, the plane was being used as a bomber to help drop chemicals on forest fires in the Los Angeles and southern California area. 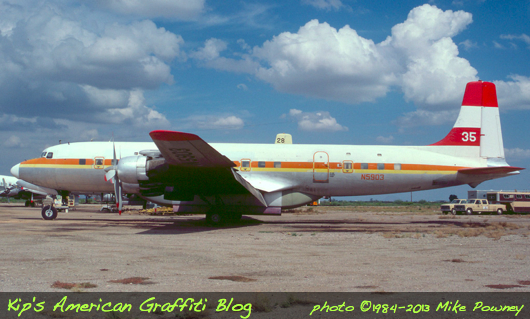 This photo taken at Chandler Memorial Airport in Arizona on 10/11/1984 is the last known photo of the proud old aircraft before its demise.  Two years later on 10/09/1986 the plane flew it's last flight at the Dakar-Yoff airport in Senegal (the north-western coastal portion of Africa.) The DC-7C was taking off and once the gears had retracted the #4 engine stopped and the propeller feathered, the plane lost altitude and ditched off Dakar.  The three crew members died and the only passenger on the plane survived injuries.