SPEAKING WITH THE REAL KIP PULLMAN: A CONVERSATION WITH ED GREENBERG

One of the best scenes in American Graffiti is the brief interaction between the characters Curt Henderson and Kip Pullman.   Curt is being driven around by Bobbie and when she spots Kip she asks to be introduced.  Curt yells out, "Just wanted to let you know that Bobbie here is hopelessly in love with you and trembles at the sight of your rippling biceps."  Kip responds by looking forward, closing his eyes, and nodding his head. It is a take that is priceless.  Bobbie, completely embarrassed and angry, stops abruptly at the curb and starts flailing Curt with her purse as she screams, "Get out I hate you!"
Kip Pullman was played by actor Ed Greenberg.  A U.C. Berkeley graduate, Greenberg began his acting career in San Francisco’s famed improvisational comedy troupe “The Committee." It was during that time that he was hired to be in Graffiti.  [For more on THE COMMITTEE see our CASTING GRAFFITI article].  Since those early days he has worked constantly as an improvisational theater and television comedy director, as well as a voice over actor and acting teacher.


In the early part of June 2007 I had the pleasure of talking with Ed about his role in American Graffiti.  He was very kind and thoughtful and a pleasure to speak with.  The following is a transcription of our phone conversation.
__________________________________________
Q:  At the time AMERICAN GRAFFITI was made you were in a San Francisco improvisational theatre group called THE COMMITTEE.  What can you tell me about the improvisational group and their involvement in the film?
EG: When casting director, Fred Roos was looking for players to be in the film he had seen me and thought I would be good in the film.  THE COMMITTEE was the go-to group for any movies that were shot in Northern California.  We wound up performing in a lot of local films.  For instance, members of the group had parts in BILLY JACK [1971], where I played a "free-school" teacher.  We were also in films such as Clint Eastwood's DIRTY HARRY [1971], and Alan Myerson's STEELYARD BLUES [1973].
Q: How many members of THE COMMITTEE were in GRAFFITI?
EG: About five, I think.  Lets see, Del Close [Guy at Bar], Scott Beach [Mr. Gordon], Jim Cranna [Liquor Store Thief], John Brent [Car Salesman], and myself.
Q: Anyone else?
EG: Well, there were experimental splinter groups which came out of THE COMMITTEE workshop. One was called THE EXPERIMENTAL WING. Joe Spano [Vic] was in that group.  And, Chris Pray [Al] was in another San Francisco improv group called, THE PITCHELL PLAYERS.
Q: Although you were living in San Francisco at the time, weren’t you also working in Los Angeles?
EG: Yes.  I was doing a lot of voice-overs and I worked on some films in LA.  I was working with an agency there.
Q: So, when you got the part of Kip Pullman and arrived on location, what was your overall impression of the scene you were filming?
EG: Well, it was rather isolated.  George Lucas and crew spent a lot of time setting up the shot. Anybody who's worked on films knows this is typical. Setting up the shot took much longer than it did to actually film the scene I was in.  It isn't easy lighting up the cars and the interiors at night, so it took some time to get everything right.
Q: Did you rehearse much with Richard Dreyfuss?
EG: Yes. While the crew was setting up the shot, Richard and I had a lot of time to improvise together as our characters, "Kip" and "Curt". We'd say things like, WHAT ARE YOU DOIN'  DRIVING AROUND WITH THOSE TWO GIRLS?  Or, HAVENT YOU GOT A JOB YET? And just have fun.  By the time we actually shot the scene we were like we really were high school buddies. 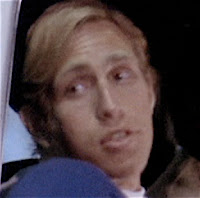 Q: How much time did you spend on location?
EG: Just one night.
EG: In the film, you have what appears to be an early-60s surfer boy haircut.  Was your hair normally like that?
Q: No.  Actually my hair was shoulder length so we tied my hair up and put it into a navy sock cap.  So, I suppose it gave the illusion of short hair in back and long in front.
Q: Do you remember anything about the guy who was driving the car you were in?
EG: I kind of remember the cars being driven by their owners, but I don’t really remember specifically the guy who drove the car I was in.
Q: What about actress Lynne Marie Stewart who drove the VW Bug that Dreyfuss was in?
EG: Well, I was getting to know Lynne who was a young comedy actress out of LA.  I knew she and Cindy Williams were really good friends.  Since the film was released, I see Lynne about once every decade and we always refer to each other as MY LOVE INTEREST, [laughs].  Its our little joke.
Q: At the time you filmed your part did you think American Graffiti would be so popular?
EG: I knew it would be big, but I had no idea it would be that
Q: How has the film impacted your career/ life?
EG: First of all, 30 yrs later some guy called me up and started asking me all these questions [laughs].  Seriously, with all the things I’ve done to this day, the fact that I was in such an iconic movie is a really cool thing. Once in a while, people will come up to me a start reciting lines from the scene I’m in.
Q: So, what are you doing these days?
EG: Well, I recently went to Rwanda as a state department cultural envoy to train an acting company.  The training was for entertainment but also to give them improvisational theater game skills that can positively affect the lives of their fellow citizens. I really enjoyed it. We call the organization LAUGHTER FOR A CHANGE.   The work I did in Rwanda crystallized my focus to expand upon the power of improvisational theater as a tool for social change in a global setting. I like the experience of knowing that comedy and laughter can change people's lives in a positive way.

Posted by Mark aka Kip Pullman at Friday, April 08, 2011 2 comments: Links to this post